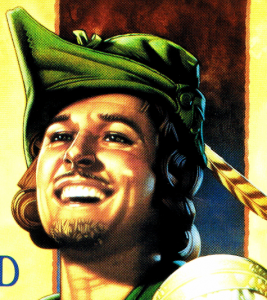 In 1991, Robin Hood: Prince of Thieves, a movie starring Kevin Costner was released as the first Robin Hood movie since the legendary Richard Fairbanks starred in the same role based upon saving Nottingham from the cruel Sherriff who is plotting to take over the kingdom while Richard the Lion Heart is away fighting the crusades.  The movie opens in a “Moorish Prison”, dark, gloomy; with the gloom punctuated by the moans of the sick and dying prisoners.  One of the prisoners is sitting along the wall with a hood pulled down over his face. Suddenly, like a bugle call, a scream echoes throughout the dank prison walls, a deep voice says, “The punishment for stealing, is removal of the hand at the wrist.”  The guards start to drag an old weakened prisoner to the chopping block.  At that moment, the hooded prisoner, raises his head and says, “Take me instead, for I am much younger!”  The guards look at each other, shrug their shoulders, drop the accused prisoner and grab the hooded prisoner taking him to the block.  One guard ties a rope to the wrist of his left hand pulling tight, forcing the prisoner to keep his hand aligned to the block while the other guard grabs a huge and gleaming axe.  As the guard with the axe raises it into the air preparing to swing, Robin Hood knocks his hood back to his shoulders, and looks sharply at the axe coming down on his wrist, then looks at the guard holding the rope, and in one quick motion pulls hard on the rope so that the guards wrist is pulled to the block, and the axe swings to a sickening thud into the block, severing the hand, leaving the guard screaming in pain.

The good news is that Robin Hood then uses the confusion to escape from the prison and travels back to England where he saves Nottingham for his countryman and his king.  The bad news is that Robin Hood chose to ignore his investment policy statement!  Let me explain what I mean.  Most people, who think of themselves as some kind of investment counselor, will ask a client to explain to them how they feel about risk.  Questions are asked like:  If the value of your investment drops 20% will you be able to maintain a positive outlook?  Will you recognize that the decline is temporary, and that it is all part of the ups and downs of the market place?  What is your time frame, et cetera?   The questions are designed to make you address how you will feel in the future should you lose money.  These questions come under the general category of Investment Policy.  Investment policy is a process by which you determine in advance how you will act or react to changes in the market, how you would like your investments to respond and what investment strategy best supports you and your money.  It presupposes that you can predict how you will act in the future concerning a hypothetical list of possible events.  Of course, knowing how you will act, allows the investment counselor to pick out the –theoretically- right investment.

Pretend for a minute that as a part of the investment questionnaire, one of the questions is as follows:  “You give me (the investment counselor) in the case of an automobile accident, the authority to decide in the event that your hand gets stuck in the door, how many, and which of your fingers may be cut off to free you from the wreck.  Now, for future reference, which of your fingers would you allow to be cut off in the event of an accident?” After careful consideration, you decide that you would gladly give up your little finger to free yourself from the car and save your life.  Fast forward to the dreaded day when you are in a car accident, trapped in the car, and the only way out of the car is to cut off your little finger.  Your investment counselor is there saying, “Well ,you did say in your investment policy statement, that I could give the OK to cut off your little finger in the event of an accident!”  And you think to yourself, “What, was I nuts!”  And to your investment counselor, you say, “Have you got any better ideas?”

It is my belief and experience that questions asked in the present about how you think you would act in the future do not give a very reliable answer. In the Robin Hood example and in the “car accident investment policy”, the missing ingredient is the ability to know how you will act when the actual event occurs.  Are human beings able to think about the future?  Absolutely, that is one of the ingredients that make us unique.  Our ability to be objective about future risk allows us to do, and plan to do, things that maybe would never get done.  However, this objectification never has the identical feeling of the actual moment.

Going forward, when asked about your risk tolerance, pause a moment, and say to yourself, “At the moment of maximum pain, am I really going to be that brave?”