Magazine cover stories have a tendency to emphasize the popular belief at the moment the article is published.  Or to put it another way, what the market is doing today is taken as an indicator as to what the market will do in the future. 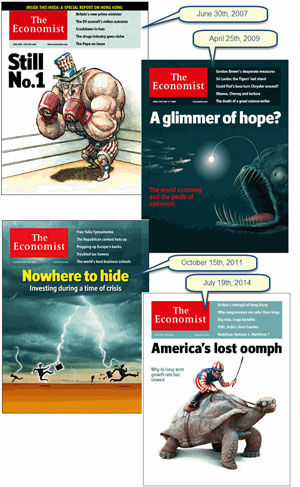 I present for your analysis four Economist magazine covers. The first two covers are from the period punctuating the end of the bull market in 2007, and the beginning of the current bull market in April of 2009.  Clearly the positive tone of the June 2007 cover was missing the hidden problems of the mortgage market.  And the April 2009 article emphasized the gloom and doom of what had happened in 2008 and the beginning of 2009, but underestimated the gathering improvement in the market.  The next two covers do not cover the entire bull market to date, but certainly the period when United State equities started to dominate.  October 15, 2011 capped a period from about May of 2011 until mid October of the same year when the market was down about 19%, so the sobering thought was that all hopes of market improvement were off.  And, really, that was the point based on our relative strength analysis, that US equities moved into first place ranking; usually a good sign for investors.  Fast forward to the most recent cover, if nothing else, the cover would challenge the most bullish of investors to question the continuation of the bull market.

What Clients are Saying

“Thank you so much for the very thoughtful retirement gift! That was very sweet of you! 🙂

I’m sure it will take a while for the concept to sink in, that there is no more daily “work routine”. We look forward to this change in lifestyle. And we credit your wisdom and guidance in helping us achieve our goals!” – Jim & Amy