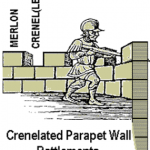 Allow me to tone down the seemingly alarmist meaning of the words: “End of World Market”.  “End of World Market” refers to a style of portfolio management that treats most risks as a risk that has the potential to move the market to a 50% decline.  Pretend for a moment that you and I are living during the revolutionary war.  We live in upstate New York.  It is the beginning of the war.  After several initial skirmishes most able bodied men have joined the military effort.  Most families have moved into the fort.  The fort guards a long west and east view of the Mohawk River.  The location is strategic.  In this situation I am the private.  I am walking the parapet built at the top and behind the fort’s log wall.  The parapet allows me to walk guard duty all around the perimeter of the fort.  Luckily for me the platform keeps my body behind the wall, but every so many yards there is a gap in the wall that allows me to look out at the view to determine what events might be unfolding.  I have a perfect view at some locations up and down the river, but clearly the farther away the object the hazier the determination as to what exactly I can see.  This particular night, walking guard duty, I am approached by the Commander of the fort….you!  You look me in the eye and say: “Private with the war having just started, it seems like we have no friends, everyone is an enemy… the British, the Indians, loyalists, and possibly even the French trappers. You and I have an enormous responsibility.  We have given shelter to any of the families in the valley that want it.  We have all the soldiers stationed in the fort.  And, we have been charged with guarding the western frontier.  It is rumored that the British are planning a 3 pronged attack to separate the colonies.  The British could easily send an army from the west along the Mohawk River.”  My response is: “yes sir, the situation while stable tonight could easily become the most grave.  What are your orders?”  You the commander say, “Take no chances, if you see someone approaching, and you think they pose a danger, you are ordered to shoot.”  I say, “But, what if I am not sure?”  You say, “Pull the trigger!”  I say, “Yes but what if it is a mistake and I shoot a good guy?”  And you say, “That is just the risk we are going to have to take!”

“End of World” portfolio management is willing to take the risk that protecting against all risks may wind up being too cautious.  It would be an interesting lesson in market history to track down all the seemingly innocuous risks that have been the tipping point for an ensuing market decline.  In this case I am going to rely on your understanding that there have been plenty of those times.  Or more blatantly stated, there have been times where seemingly from out of nowhere the market and the economy have headed down.  Or more importantly, the decline as played out in your mind and your life has been a surprise.

It is hard to believe that the revolutionary war was one long unending battle.  No breaks. Every day was cloudy.  The selection of native deer, trout, and turkeys simply disappeared into the woods.  It was gruel and hard tack for all.  In much the same way a money management strategy that is designed to be constantly vigilant may simply encounter sunny days… in fact long periods of sunny days.  A valid strategy must allow for positive periods in the capital markets.

The classic problem with static strategies is that they do not allow for flexibility.  Allocation strategies that hide behind the “Pie Chart” image are just those strategies.  As the commander of the fort, do you make one determination of risk that never changes?!  The war is nearly over, clearly the danger is less, but I (the guard) am still told to shoot to kill….even if they (the theoretical bad guys) know the passcode?

“End of World” Market management is a solution because it establishes in advance what the range of risk management is to be.  Let’s say that in the tightest of all situations, the percent allowed in stock is only 15%.  When we have a string of sunny days in the market the percent allowed is 60%. The range of risk management is 45%!  What is critical is that the guards are still posted.  The families may be out of the fort, holding a venison roast, but the guards are still looking for any sign that signifies they need to run for the fort.

“End of World Market” management is precisely that:  predesigned to be careful, any movement in the bushes is treated as suspicious and justifies returning to the fort; but, predesigned to allow for sunny days in the market.  My proposition is that money management strategies will work even when they are designed to be flexible.  And in the next articles you will see how clearly defined strategies like “End of World Market”, “Normal Market” and “Beat the Market” strategies can be present in the same overall portfolio.